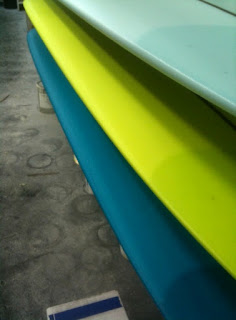 Josh is a tease. Showing us a little color of the new Eagle rails that are coming. Keep your eyes posted for when they fly into our shop. 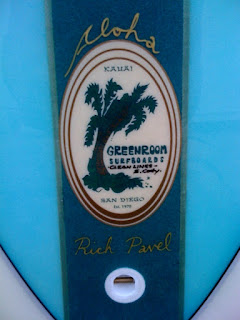 Yeah, yeah, yeah so I made the name up, but I'm creative like that. Sorry the blog has blown it for a week, but I heard lake Erie had a mean wind swell so I made the trip. Well, it blew, but that's about it. While the week passed Rich Pavel finished up a one of a kind long board for us here at Mitch's. 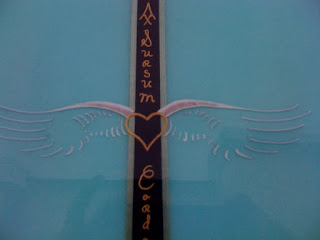 If you know about Pavel then you know that only his hand-shaped boards receive hand drawn logos on em. The art states "Sursum Corda", which in Greek it translates into "Let us lift our hearts". Pretty cool little touch that Rich slayed down on this one. 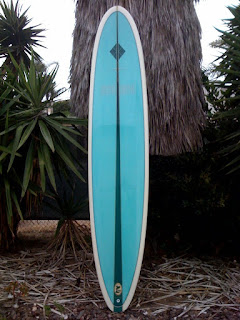 So why name it the Pisces? Um, the "P" stands for Pavel, and it was made of ice 9. Put the two together and "The Pisces" was created. Some say that the name is derived from constellation of the Zodiac, but I'm pretty sure my reasoning is correct and that Astrologist don't know dunk. 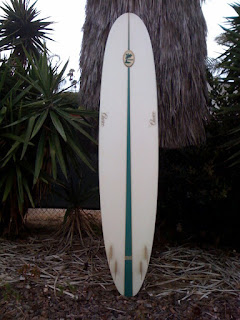 I mean Rich was around when Steve Lis made the fish, and Rich is credited for putting four fins on a fish. Take a look at "The Pisces" Rich said lets put four fins on it like he did here with this board, Um, can you say "Pisces"? To even further back up my reasoning look at the Latin translation of Pisces. It means "Fish". It all comes together. I'm right, Astrologist wrong. 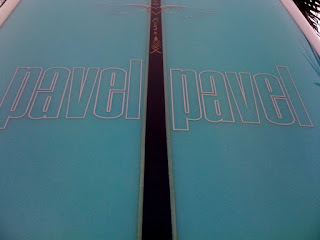 Go ahead, talk to your local Astrologist. Ask em about what Pisces means. They'll probably mention something about two fish tails being tied together, which I would then further argue why the name fits this surfboard rather then some star constellation. That's why this board doesn't have a swallow tail, but can still have a name that means Fish.

Anyways, this thing is a one of a kind board from Rich Pavel. Ice nine dropped of this blank a ways back to show the public that they were capable of doing unique blank glue ups. Rich saw it and got creative. 9'0 with Geppy quad glass-ons. She's a real beaut'

Thanks for following the Blog,
-Clog-
Posted by Mitch's North at 4:44 PM No comments:

This CC Slider needs a Rider 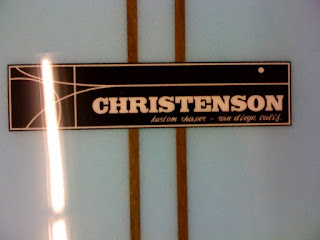 Hello again. Chris swung by and dropped off this new Slider the other day. We also have some more stuff coming that soon. New Detemple's, C-Unit's, and some Cafe Racers so be sure to tune back in to our blog if your too lazy to come into the store, or if you live in another country. 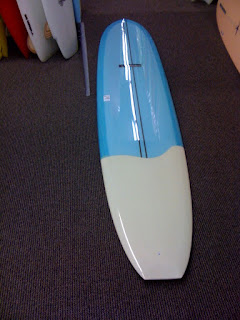 Summer is finally here along with its crappy waves. Long board is no longer the wrong board to have...
-Clog-
Posted by Mitch's North at 7:09 PM No comments: 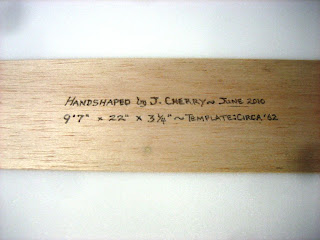 Mr. Cherry has been a long time customer of our shop, and we have always discussed how we would like to see one of his hand-shaped boards. John is a talented wood worker out of Southern California that we usually buy fins and different types of wooden tools from. This time the fin that he brought was attached to one of his fine boards for us to display at the shop. John not only builds boards, but can appreciate others that do the same. He is one of the only shapers that I have ever met that has actually bought another shapers board, because of his pure interest and love for the shape. (From us, off our rack, full retail. Had to cover my butt before all the old salts start complaining about that comment) 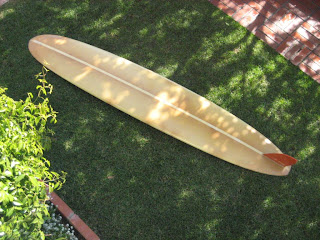 Here is what I'm talking about. John is also an avid collector and decided that he should build a board thats based off of this 1962 Hobie. The dimensions of this and the reproduction are exact, measuring in at 9'7 x 22 x 3 1/4. Same tail rocker is added to ensure a classic ride. 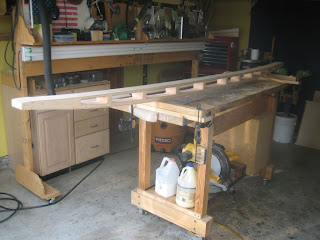 Take a close look at this. The stringer has one modern update, its chambered. He said it was a huge pain in the ass to do, but the difference in the weight was worth it. Originally started off as a solid 3" ultra-light balsa. 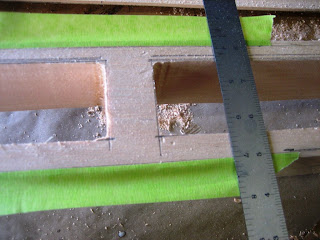 Close up of the chambers. Each one individually carved out by John. As you can see he is quite the craftsman completing every step of building the blank. 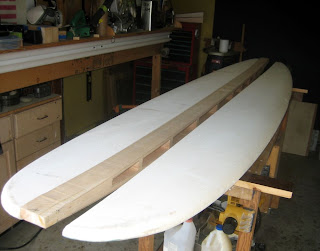 Forgot to mention that John also lowered the nose rocker a little. This is the blank pre-glue up. 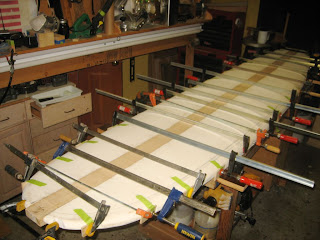 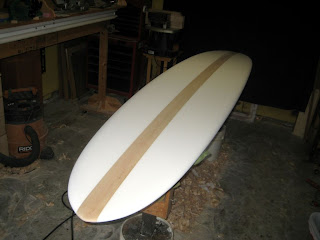 Shaped out of a 9'9B US Blank, green density. 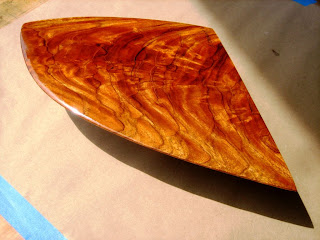 This early 60's "D" fin is amazing. Made out of Jatoba, which is a type of Figureo Brazilian Cherry, I think. Johns probably gonna punch me in the lip if I got this wrong. Picture does it justice though. Keep your eyes open for the next issue of Slide magazine where this fin will be featured in an article that John could not go into much detail about. 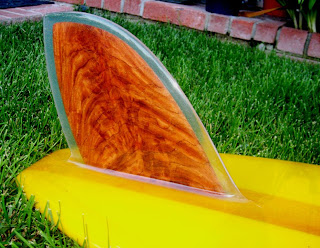 Glass job was given to Micheal Miller Glassing down in San Diego. Double 6 deck and bottom with a Papaya tint and Resin Pin Lines. Micheal did a great job. 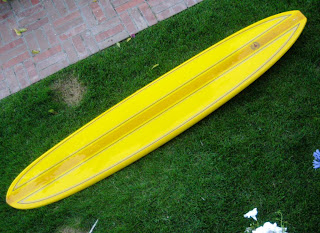 $1500, which is more than fair. It will be on our ceiling, but not for long. Thanks John for building such a fine piece of art. 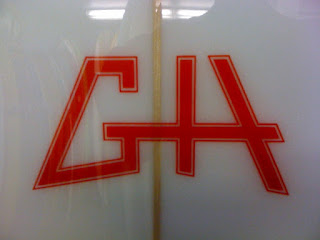 Gary stopped by today with some of his quad fins that he had glassed over at moonlight for us. Nice rails that would be able to handle some surf. Thinned out so you can still get some performance out of your fish. Come check em out before they're gone. 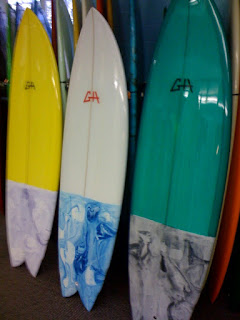 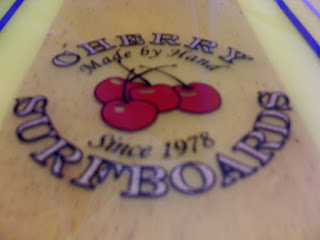 I would show more, but I need to do my homework on this one. It's a beaut.