Gets me every time. 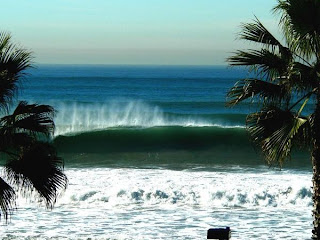 It seems like it was just about the same time of year as it is now only a few years back. There was one of those choice high pressures holding over the coast while the lines where fetching from the south, pushing into shore with perfect power and posture . I had been surfing my tookus off and missing a whole lot of class most likely. I blew my fin off on my shin surfing D street or something and my other hot stick had snapped surfing Deemers the day prior. In need of some rocker and more than one fin I found myself having to ride a yellowing, duck-taped, ten pound piece of suck that I had dug out from the garage at my old house. I re-waxed it and put some stickers on it and told myself it would ride fine, if the waves are good enough you can ride anything right?

The next morning I peeled out of bed and rendezvoused in the kitchen with my roommate for some coffee as we quacked about the surf and the board I was riding. We were both a bit surfed out from the past three days of marathoning but there was still swell in the water and the wind was still on vacation so naturally we couldn't resist. We rolled down to the beach casually, thinking maybe we might not surf if it was just ok or if the tide was a bit off. As we pulled down onto the strand I was fumbling for my coffee or a cd or something and I hear mike's voice stumble, " HOLY SH!#!" My head snapped up quickly, half expecting to be ready to hit a cat or something and I look south toward Wisconsin and there's a hundred A frames all breaking at once as far as the eye can see. The sun was still new, casting its light gently across the face of each closing tunnel that was exploding on the sand. It was generously over head and at any moment you could see three to five black silhouettes tucking into their secret cavernous discoveries. Never before had or have I seen such perfect, precise and continuous beach break riddle the shore in SD county (I don't surf Blacks that much). There was an endless swirl of foam and whitewater on the inside and the first fifty feet off the surface of the ocean was a glowing, foggy mist. It was as if there was a marine layer just at the coast but it was just the watery shrapnel from each fanning lip and crashing eruption of the thousand waves that had already lived and died that morning. THE SURF WAS GANGBUSTERS!

Now, I don't exactly know how sheer excitement and a little bit of fearful adrenaline stimulate the nerves in your stomach, namely the ones directly in charge of getting rid of what you ate the meal before but mine sure as hell go bonkers when the surf is good. When the surf is firing I feel like every second I'm not in the water is like three minutes long, every stop sign is like five o clock traffic and I'm just about willing to park on some one's lawn and pay the towing bill later if I have to. On this morning we were lucky enough to cram Mike's truck into a spot right on the Pacific St. and he was getting shacked before I even found my wetsuit, he's one of those guys that does everything fast. As I'm frantically pulling on my wetsuit my stomach is frantically trying to tell me there is an emergency drop off that needs to be made asap or something very bad may happen! Confused and anxious as all hell I can not see or think of a single place within a reasonable distance to let out the beast that's knocking on the door louder and LOUDER! The surf is freaking going off and to make matters worse I see Mike take off on a bomb and disappear behind a giant shimmering curtain. AAAAHHHHHHHHHH!!!!! With my brain clouded and all reasonable judgement disabled I spot a semi secluded corner near some dumpsters at the a base of one of the beachfront apartment units. There was no choice at that point, I was either going to having one big, ugly unwanted scene on the sidewalk in the middle of the bustling morning passersby and surf checkers or I was going to be a rotten SOB and let this thing lose next to those dumpsters. The choice was made and after twenty two seconds of rip roaring relief I was FREE! I'm scrambling back across the parking lot toward the truck when I hear " HEY! What the F@#& were you doing over there?!" I crank my head back and see a haggard dude in a robe with a cup of coffee in his hand up on the balcony staring down at me with the look of death, willing to come down and snap my neck but much too lazy and fat. I say, "nothin" as I continue, hastening my jog I think to myself "holy sh#!".......literally! With residual adrenaline from the dumpster incident and a new shot from being called out I'm kind of smiling, a little shaky and more eager than ever to get in the water. I get back to the truck grab my rad board from the back and start jogging up the sidewalk, just as I'm going to cross the street an O'side Cop rounds the corner on the sidewalk. Staring right at me he yells, " HEY! YEAH YOU!STOP RIGHT THERE!" I bring my jog to an idle and my stomach drops in a new way, I'm totally busted! Just as I'm about to start fumbling some lame excuse out of my mouth the cop continues his glare right on over my shoulder as he marches right by me with his hand on his baton. WTF? I look behind me and see a token o'side strand crankster walking up the sidewalk behind me as the cops overpower him in their questionable jock-like way. I cross the street as my legs are ready to give out from so many mixed signals of stoke, fear, adrenaline and disbelief. I finally make it out to line up and see Mikey out there shaking his head with a smile like the Cheshire Cat as he points down the way to someone getting drained. I shake my head with a smile just as big but it's not the waves I'm buzzing about. I surfed for a solid three hours that day on my yellowing piece of suck, pulling into some really nice rooms and getting absolutely destroyed on every single one of em'. I like to think I surfed like crap on one of the best days I've ever been out because of my board, but maybe it was because I suck in general, or maybe just maybe it was the sh!##y experience I had that morning that threw me off. Still don't know. -Bloggins-
Posted by Mitch's North at 10:53 AM 1 comment: