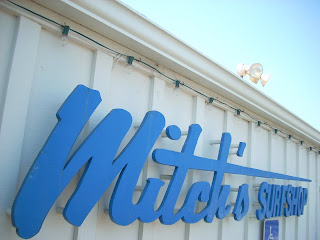 WHAAAAT??? We're having our first ever sale event here at the shop on Feb 5th in the parking lot. Music, free hot dogs, super deals on clothes, wetsuits, and Tudor surfboards! Get right out of town!


I pulled away from my house Monday morning thinking I was strolling out for a mellow mid-morning, early weekday session. As I neared the startlingly crowded buzz of cardiff commotion stretching from the Reef to Swami's my hopes of getting some wide open sliders began to diminish quickly. I peered fearfully from the safety of the glass encasement of my car at lines ten deep of people waiting to rinse off at the shower and people clogging every parking lot entry and exit anxiously waiting to pounce on any legal place to rest their vehicle. Minding my own personal sense of well being and positivity I encouraged my self to not get frustrated and that the stoke would reveal itself if I calmly let it. As I crept into the swami's lot I snagged myself a parking slot first lap and so did Jim Swarthow. I was now becoming slightly re-assured by my internal self persuasions to stay optimistic.
With fifty guys out front we walked a tad north as we usually do. In search of something healthier than the crowded elbow bump screaming match mumbo that the Swami pack promotes we stroked out into the open stretches at Patches. We shared some ideas as to why the crowds were so thick and related it to the flaring sunshine and the warm temps that we have been waiting for since last year. With more insight we realized it was a holiday, and we aptly named in Martin Luther Ding day as we watched the drop-in parade down the way at Swami's. As the tide continued to back away the surf improved and within a half an hour the surf was putting on it's best show. A whole heck of a gosh darn lot of waves later and no more energy to expel I took one in and shuffled up to the rocks shaky legged and hungry as a spring grizzly. Looking out to sea as Jim catches one in and I smile and waggle my head in awe of how the day had unraveled.
As I have been reminded of so many times these past couple years I was once again taken aback by the power of perception and positivity and the doors it opens in this life. This day was just another subtle reminder that you can make anything what you want it to be and sometimes you can find yourself in complete bliss with just a little effort. Hope you made it through the holiday weekend without any dings and a smile on your face. Thanks for dropping by. -Bloggins-
Posted by Mitch's North at 12:22 PM 1 comment: