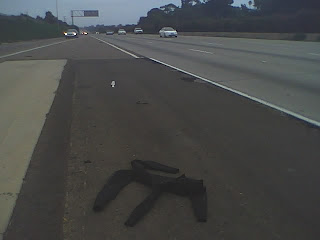 ...wetsuits are not here yet-end of september. But they are really good suits. Check this out-
Surfing Sunday night. Tried out the Joe B. 5'8 Simster quad. InSaNe off the line speed, but
thats another story. Had a few cool ones on the beach after the sesh. Head over to the
local pub for a burger and some pints. Hang the Matuse full suit on the tailgate of my truck.
Kevin puts his long board in the truck, covering the suit. Time to go, move the board over
but don't even notice the wetsuit. (darn pints) Take the freeway from Solana to La Costa ave.
Unload all the boards and gear, but where is the Matuse? Call Kev to see if it's in the parking lot. No dice. Totally bummed. Favorite wetsuit ever. Wake up early to surf the next day, with
missing Matuse heavy on my mind. Drive to the pub parking lot, no dice. Roll up Lomas to I-5,
still, nothing. Bummer. Surf check says eddy is back strong, surf is blown to bits. Double turds.
Heading home with my tail between my legs. I spot a small black pile on the side of the freeway-NO WAY! Matuse! Back track to the on ramp where it was seen. Pull right up to it
and get out. Car goes by BLARING the horn and I get the look of death. I politely wave with
my middle finger high. Go around the front of the truck to re-unite with Matuse, and, it's,
a DIRTY SWEATSHIRT! AAAHHHRRRGGGG. Rat farts. Back down the road, headed home. I
think thats three bummers so far. Oh well. Guess I'll go back to bed. What's that? Another
unknown black pile of who knows what on the side of the freeway. By now I'm at Leucadia
Blvd. "That's got to be it." Super braking stop to quick reverse. "I think I see taped seems!"
Jump out and there she is. Miles down the road. Surely run over by at least a few cars. Some
road dirt and a small hole in the ankle is the only damage. SO PSYCHED! Matuse is back! I
guess she wanted a taste of the streets, or just to get away for a night. So if you have been
spending a little too much time with your Matuse, maybe she needs to get away for a bit.
But don't worry cause Matuse is built FREEWAY TOUGH!

The long commute from La Costya to DMRMOD was becoming too heavy for the suit and soon it became suicidal. Forcing a half hearted jump from the truck at high speed the suit quickly realized it was much too light to self inflict a fatal impact or abrasion. Exhausted and full of guilt and remorse the black mass longed for home after realizing how sinister and relentless the loud,stinky noisy world could be. Far from the familiar pits and crotch it had reluctantly grown to adore the suit began to wish and pray to the gods of surf to bring him back to his pilot of slide. With legs and arms crossed for hours and hours there was soon a familiar and comforting sound of an exhaust leak rattle and a loud clutch bearing approaching....it was him! He had forgiven and come looking for embrace..... and warm, stinky, rubbery embrace is what he found.